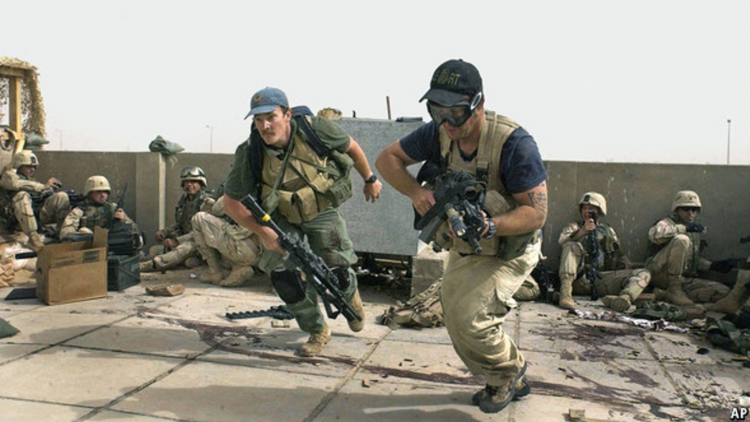 The infamous 2007 Nisour Square shooting in Iraq that led to the deaths of 17 civilians at the hands of American private contractors unleashed public debate about ethical use of these actors in armed conflict that continues to this day. Even before the incident, academics, non-governmental organizations, and some in the Department of Defense have recognized the danger of turning to private contractors to improve military effectiveness.  This is mostly because unlike public forces, private military and security companies (PMSCs) are profit-driven entities. The desire to maximize profit increases the risk that companies could engage in fraud or cut corners when it comes to human rights protection.

In 2011, for example, a congressional study showed that the amount wasted in payments to private contractors in Iraq and Afghanistan reached anywhere from 31 to 60 billion dollars. For actors that are interested in getting quick results, indiscriminate use of force or limited concern for civilian welfare might be tempting. Interests in securing profit can also mean that companies simply neglect to invest in robust employee training on proper interactions with civilian populations in conflict zones.

Improving accountability of PMSCs to reduce these dangers has been addressed with several measures. These included delineating good practices that governments should embrace when using PMSCs in conflicts as outlined in the 2008 Montreux Document and certifications requirement for securing contracts from ANSI/ASIS International Management System for Quality of Private Security Company Operations or from International Organization for Standardization, among others. The U.S. and U.K. require that companies have such a certification to demonstrate their specific commitment to improving practices designed to limit the risk of human rights abuses in their day-to-day operations.

In addition, over the years the Department of Defense has sent more agents into the field to monitor companies in Iraq and Afghanistan. These measures encourage companies to take accountability and ethical concerns more seriously. However, they are not sufficient. For one, certifications do not guarantee the company will honor obligations once it secures a contract. Second, in many instances it is not always possible to have sufficient number of qualified monitoring agents in the field. This is even more apparent when PMSCs work for governments other than the U.S. with limited resource base to engage in robust monitoring.

While it is tempting to assume the monitoring problem is less relevant today as the wars in Iraq and Afghanistan are coming to an end, governments worldwide will continue to rely on PMSCs to fulfill their military and security needs. According to Visiongain’s 2019 report on the future of private military and security market growth, which focuses on international PMSCs such as CACI International, DynCorp, and Erinys International, the market is set to grow to $420 billion by 2029. The need to manage the changing nature of armed conflict is cited as one of the reasons for continued demand.

The media has recently focused on the rise of Russia’s Wagner Group, a company that has provided services to governments in Africa and Syria and whose presence has been linked to human rights abuses. While the likes of Wagner Group are undoubtedly here to stay to serve the interests of some, it’s clear that international PMSCs that operate as independent corporate businesses continue to be relevant players on the military and security market. Unlike Wagner Group, which operates more directly as Putin’s ‘army’ and allows Russia to spread its influence, other types of PMSCs operate as independent corporate entities that compete openly for contracts on the international market.

My research on these international PMSCs that operate as independent businesses shows that the forces of market competition help improve their accountability in civil wars when they face competition at the industry level or competition in a given conflict zone. As long as companies must compete in an open market to survive, they will have to adjust their behavior to meet the clients’ expectations by being militarily effective. Refrainment from fraud and adherence to international humanitarian laws are vital elements of military effectiveness. For example, insurgent forces can use civilian abuse as a cause to rally supporters and undermine military gains. Wasted resources could be allocated to strengthen mission capacity. Thus governments benefit when companies are seriously committed to ethical behavior.

When the right conditions are present, specifically when international PMSCs operate in a competitive environment they become more accountable and improve their performance. They contribute to quicker termination of conflicts even when we consider alternative factors that impact conflict termination. How do we identify the presence of such competitive environments and what role do governments, such as the U.S. play in harnessing the positive benefits of the market?

First, competitive environment exists at the industry level. As opportunities for lucrative contracts tighten companies face more pressure to differentiate themselves from their competitors. One of those strategies of differentiation involves securing capital by becoming a publicly traded company and garnering more resources to diversify services. The governments benefit from this transition because publicly traded companies are more likely to face scrutiny from the media. Negative publicity linked to unethical behavior has greater potential to hurt publicly traded companies than private ones because the former are accountable to a greater number of shareholders who can punish them by selling the stock.  This possibility pushes public companies to be more cautious when it comes to engaging in criminal activity such as fraud and human rights abuses.

My analysis of human rights abuses committed by PMSCs in Iraq from 2003-2019 shows that publicly traded PMSCs have been linked to only 13 percent of all cases of human rights abuses and 20 percent of cases of fraud.  Publicly traded companies across all civil wars with at least 25 casualties from 1990-2008 are also more likely than private companies to be associated with shorter conflicts, demonstrating that when companies alter their corporate structure these moves come with tangible benefits in the area of ethics and military effectiveness.

The implication here is that governments can benefit from growth in the number of military and security providers, especially when this growth expands to involve the rise of publicly traded companies. While outsourcing services to a company based exclusively on its corporate structure would be discriminatory, contract specialists could nevertheless include specific transparency criteria that could favor such actors. These non-cost factors in awarding contracts could include not only disclosure of risks and past performances in the area of human rights protection but also consideration of most recent media coverage of companies’ connection to criminal activity. My findings show that publicly traded PMSCs would be more likely to score better on the media coverage dimension as they are more risk averse when it comes to committing significant ethical violations.

Second, governments can create a competitive environment in a given conflict zone by dividing contracts among several PMSCs. This is prudent if the goal is to increase accountability. The presence of an additional PMSC puts pressure on another company to perform better and avoid the kind of human rights abuses that democratic governments seek to limit. This occurs because there is a possibility that a rival company can report violations and exploit its competitor’s weaknesses. Furthermore, companies have an incentive to monitor each other’s behavior because of safety. Mismanagement on a mission by one security provider puts other contractors in a harm’s way.

This type of peer pressure is not codified, yet my interviews with prominent American contractors revel that it exists. The mere possibility that one could be reported puts pressure on companies to embrace stronger accountability standards on the job.  This informal monitoring generates promising results.  My analysis of major civil wars with at least 1000 casualties from 1990-2008 that include some conventional fighting indicates that multiple PMSCs are effective in assisting the governments with shortening the war.  And the positive outcome is not merely due to the extra help that multiple companies clearly provide.  Even when I account for the additional resource explanation, the existence of local competition in a given conflict has an independent positive impact on reducing the duration of war. In essence this means that peer pressure is likely pushing companies to perform better.

Governments interested in improving contractors’ accountability in major wars might be tempted to award one big contract to a single provider as many international PMSCs today can deliver diverse services to meet the wide range of needs. Yet this would likely backfire in the long run because it reduces the power of informal monitoring. By awarding contracts to multiple companies, governments are more likely to generate local competitive pressure that makes PMSCs more effective militarily and ethically.  In the end, under specific conditions of market pressure, private military and security companies can be a positive agent for change.